NewsNight of museums in Wsola 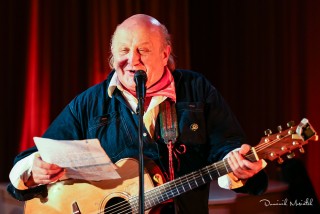 2014-05-16
Night of Museums in 2014 was modest but extremely successful, to which traditionally Witold Gombrowicz Museum invited at the eve of that European event. Traditionally, also in Wsola a good music resounded with good literary text because Jacek Kleyff was a guest of the museum, the legend, bard, poet, composer and painter. Co-founder of the Indipendent Saloon, founder of the Gesundheit Orchestra.

Kleyff was accompanied by really outstanding and equally legendary musicians: Mikołaj Trzaska and Jerzy Slomiński. We asked our guest to put in mind the audience of his old songs, for many synonymous of independent culture at a time when this independence was not easy. Above all, Jacek Kleyff wanted to present the audience a new lyrics and music, somewhat different from those best remembered, but equally important and thought- provoking.

After the concert, Witold Gombrowicz Museum remained open to the public, much less that Jacek Kleyff agreed to talk after the recital with all the willing about everything what is worth to talk about. A long queue was set to talk and take an autograph from the legendary bard. We could see that he remained a man of unusually openess to the world, ironically lyrical and critically, but wisely interpreting reality in its most everyday manifestations.