NewsOh, Gumo, if only you knew… 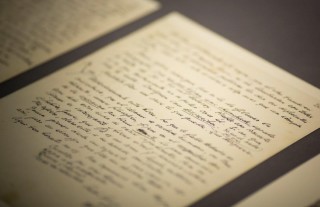 2013-04-08
THE RETURN OF GOMBROWICZ – 50th ANNIVERSARY Presentation of Witold Gombrowicz’s letters to Juan Carlos Gomez on the 50th anniversary of leaving his second homeland, Argentina, by the writer.

In 2011, the letters and postcards sent by Witold Gombrowicz to J.C. Gomez, who last year passed away, were purchased from the addressee by the Witold Gombrowicz Museum. The correspondence covering the years 1957-1965, had started in Argentina and was continued after Gombrowicz returned to Europe – during his stay in Germany and France. The letters are a wonderful source of information about Gomrowicz’s everyday life in Europe where after 24 years spent in Argentina the writer felt lost and confused.

The display entitled Oh Gumo, if only you knew… was accompanied by a musical and literary event. The compositions of Astor Piazzola and Richard Galliano were played by: Rafał Grząka (accordion, bandoneon) and Andrzej Olewiński (classical guitar). The audience was introduced to the contents of the letters by Dominika Świtkowska, Associate Professor at the Witold Gombrowicz Museum. She had an opportunity to meet J.C. Gómez while finalizing the purchase of the letters in Buenos Aires.