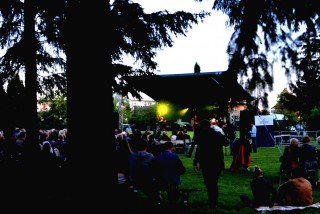 A plein-air concert of Gaba Kulka – a pianist, vocalist and lyrics writer, winner of numerous song competitions. The music market appreciated her following a release of the Hat, Rabbit album. In 2009 Gaba Kulka was nominated for a Polityka’s Passport and a year later honoured with the Fryderyk Prize in the “Vocalist of the Year” category.

A plein-air performance of Zmysły/Senses by the A3 Theatre. The performance combines many theatrical traditions which the actors told about during a multi-media lecture in the manor (this lecture is permanently presented in the Ujazdowski Castle Centre for Contemporary Art in Warsaw).

Concert of the Amok group consisting of: Agnieszka Judycka, Monika Węgiel and Katarzyna Dąbrowska, conducted by Janusz Bogacki. The singing actresses from the “Amok” group are widely known thanks to a TV series Na dobre i na złe/Through Thick and Thin, whereas Warsaw theatre goers know them from the Współczesny Theatre where they play. In Wsola they presented the songs from their debut album.

A duel of face-making with Michał Budzisz, cabaret actor from Radom, and chess duels with Doctor Arkadiusz Kądziela, chess player and chess arbiter.