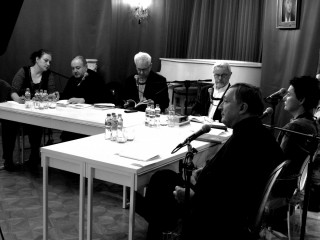 2010-10-16
1st Gombrowicz Panel Discussion on Using Gombrowicz’s texts, or What We Do With the Classics?

The discussion was moderated by Prof. Jerzy Jarzębski. Its participants were: Kazimiera Szczuka – a literary critic and historian of literature from the Institute of Literary Studies of the Polish Academy of Sciences; Marian Bielecki – a historian and theoretician of literature from Wrocław University; Anders Bodegård – a Swedish Slavist, translator and expert in Gombrowicz as well as Szymborska and Herbert; Piotr Kłoczowski – a historian of literature, editor, essayist and Deputy Director of the Museum of Literature, and Jean-Pierre Salgas –  a French literary critic, professor of history and theory of arts in École Nationale Supérieure d'Art in Bourges.

The transcript from the debate is included in this book.