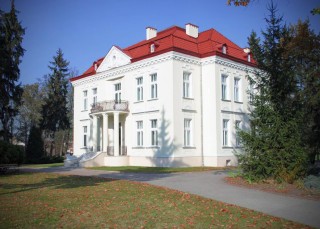 2014-10-15
Witold Gombrowicz Museum, which is a branch of the Museum of Literature in Warsaw, inaugurated its activities in Wsola five years ago. The opening ceremony took place on 10th and 11th of October and October 14th was the first day of exploring the exposure.

Since that time, we have been visited by over 25 000 people and organized more than 100 cultural and intellectual events. We are the museum for minority - the reading ones, needing contact with the living literary word. It turns out that in Radom and it’s suburbs there is quite large cultural audience, demanding and sensitive, who wants to participate in the artistic and intellectual high level events. Our offer is addressed to people from different parts of Poland and also from all over the world.

Witold Gombrowicz Museum is a cameral establishment, not only because of the small size of the residence. Just 6 people work here and grant for a substantive activity is also “cameral” - we are constantly looking for sponsors in order not to limit ourselves only to providing exposures. This year,  we enlisted from our donors and friends the decuple of the grant.

We complain only mildly, because thanks to this we found that in the closest vicinity we have many people who understand that it is worth investing also in spheres of less defining than the economy, but equally important for social development. Our friends and patrons are very busy people, so they rarely find time to participate in events that wouldn't exist without their generosity.

The educational activity and animation of creative attitudes towards the culture we conduct in different forms, more or less traditional: from lectures, discussion meetings, through small theatrical forms, the concerts, also the rock and alternative music. Thanks to generosity to our donors we do not limit access to our offer, it remains free, although we are grateful for donations from Wsola visitors.

We do not use a school coercion in order to improve the frequency statistics, although we try to adapt our educational offer to the expectations of educators and students. Despite the financial constraints we also conduct publishing activity, Wsola's literary talks can also be found in the Internet.

We have also shown interest performances and one-man shows, i.a.: Andrzej Seweryn's „Diary”, Irena Jun's „Dinner at Countess Kotłubaj”, „Trans'Atlantic” by Henryk Jozwiak, „From the Clouds to the Ground” directed by Jan Nowicki who also starred with it, and also the attepmts to measure the Gombrowicz youth's form „Gombrotyp” by Przemysław Gąsiorowicz, „Now me” directed by Grzegorz Sierzputowski, „Virginity” by Alina Czyżewska. We are planning to organize a cyclical review of small Gombrowicz's forms to stimulate their formation- for the time being it is impeded by lack of money, as usual, but this obstacle we hope to eliminate.

Although the entire exhibition space in the museum is the permanent exhibition, we were able to organize the chamber exhibitions- one was even a „momentary”: for 3 hours at Witold Gombrowicz Museum the „Kronos” could have been seen, which was intercepted by us on the way from the Literary Publishing to the National Library. We also organized the presentation of, purchased by us, letters written by Witold Gombrowicz to Juan Carlos Gomez, as well as the exhibition of photographs by Barbara Czartoryska „Seen in Lafit” in the collaboration with the Literary Institute.

We also organized the Polish premiere of the documentary film by Agnieszka Herbich and Lucas Trajtengartz, containing the memories of the last living witnesses of the Argentine Gombrowicz's biography. The film was financed of our inspiration by the Ministry of Foreign Affairs, we also served the creators with our substantive support.

We published the book „Gomrowicz and surroundings”, documenting 5 years of the Museum activity, a volume reminiscent of Jerzy Gombrowicz „A to był Gombrowicz!” („It was Gombrowicz”!) prepared by Dominika Świtkowska, „Witold Gombrowicz Museum in Wsola” edited by Tomasz Tyczyński and Dominika Świtkowska, volumes of poetry in the series „literary paper” („ bibuła literacka”)” Radosław Wiśniewski „ Abdication” („Abdykacja”) and „ Black Taxi” („Czarna Taksówka”) by Robert Utkowski; the guardian of the series is Jarosław Klejnocki.

In 2013, we organized a series of „ Gombrowicz Return” reminiscent of the 50th anniversary of Witold Gombrowicz's come back to Europe. This year, the project „Gombrowicz moves (in) the world”, reminding us that 75 years have passed since the departure of the Polish writer and commemorating his 110th birthday, was prepared.

Museum conducts educational activities, collaborating with schools not only from Radom and Jedlińsk community, but also from other parts of the country. We also begin to devote a particular attention to active older people, by cooperating with the universities of the third age.

This year, the most important event organized by Witold Gombrowicz Museum is the international scientific conference „Gombrowicz Front and Back”, which is to be attended by nearly 60 participants from nine countries. The conference, organized in association with the Radom's University in cooperation with Radom's Theatre, will begin on October 20th.