NewsThe winner of Nike in Wsola 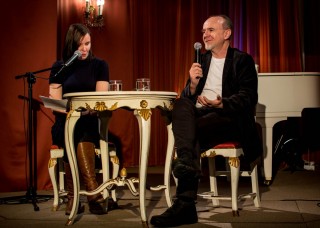 2014-02-27
Marek Bieńczyk, the winner of the Nike Literary Award in 2012, was the guest of Witold Gombrowich Museum on Thursday, February 27. (That is, the Mardi Gras, which has not gone unnoticed by the organizers of the meeting).

The starting point for a conversation with a writer, which was led by Dominika Świtkowska, he was awarded the Nike- collection of essays Face Book. The conversation confirmed what we already knew before: Bieńczyk is a versatile humanist, man of letters, able to talk in equally interesting way about literature, melancholy, wines of which he is an expert, as well as football about which he is a passionate. In addition, he can talk about extremely complex issues using light, color, intelligible language even for a recipient who is unacquainted with contemporary philosophy and literary theory.

He was nominated to the Nike award four times, including a great novel Tworki (1999). His first novel was  The Terminal (1994), he is also the author of several volumes of essays (Fast and faster- essays about the ruch in culture, 1996, Black man. Krasiński against death, 1990; Melancholy. About those who never find loss, 2000; Durer's Eyes. About a romantic malancholy, 2002; Transparency, 2007; Book face, 2011) and translations i. a. works by Milan Kundera, Emil Cioran and Roland Barthes.