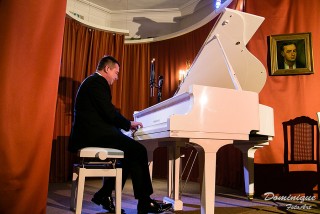 2013-03-10
The event included a piano concert played by Janusz Bielecki and poems recited by Joanna Bąk.

Joanna Bąk is a young (b. 1986) artist whose interests encompass poetry and artistic photography. Despite her young age she has managed to win several literary contests, among others, she is the Honorary Laureate of FAMA - the International Art Campus.

Janusz Bielecki has been composing music for few years only but his compositions were played by renowned artists in Poland and abroad (Belgium, Spain, France and Germany). He creates solo and chamber works as well as symphonic music. His suite for piano and orchestra was performed by the Beethoven Academy Orchestra conducted by Michał Nesterowicz.