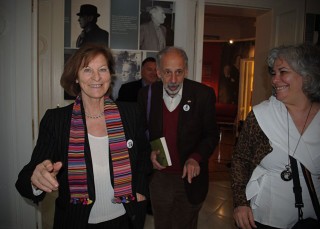 On 19 October Miguel Grinberg, Witold Gombrowicz’s friend from the last years of his stay in Argentina, was our guest in Wsola.

Grinberg (b. in 1937 in Buenos Aires) is a well-known Argentine writer, poet and journalist, the author of more than 50 books in many fields, co-founder and the leader of the so called “the 1960s generation”, a non-conformist literary and ideological trend in the Argentine culture of the last century. He was also one of the co-founders of the Argentine rock movement and was involved in the development of the hippie movement in the USA. He is also an academic lecturer, recognised editor and publisher, and an activist of pacifist and ecological movements.

The event was accompanied by a mini-recital of Argentine and Spanish music performed by Wiktoria Szubelak (classic guitar). The Ambassador of Argentina, Gerardo Manuel Biritos, was the Honorary guest. Unexpectedly, we were joined by Rita Gombrowicz, who was to arrive in Wsola the following day. The transcript of the conversation with M. Grinberg conducted by D. Świtkowska is included in this book.

On 21 October a meeting dedicated to Jerzy Gombrowicz, Witold’s brother, was held. Its participants included Mrs Rita Gombrowicz, and, among others, Prof. Roman Loth and Ksawery Jasieński. The meeting was an occasion to promote Dominika Świtkowska’s book A to był Gombrowicz!/And This Was Gombrowicz!, which is a carefully prepared collection of memories about Jerzy Gombrowicz, including a selection of documents and a thorough biographical sketch. The volume begins with Rita Gombrowicz’s  interesting sketch about relationships between the two brothers.

On 25 October we invited everybody to a discussion Why did Gombrowicz not go to the theatre?, with participation of Rita Gombrowicz, Wojciech Majcherek and Jacek Wakar as a moderator. The discussion involved also the jury and participants of the 10th Gombrowicz Festival. We were debating why Gombrowicz needed the theatre and what the modern theatrical forms need Gombrowicz for.