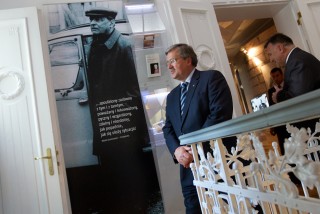 2011-06-25
President Bronisław Komorowski took part in the celebrations commemorating the June 1976 events in Radom. However, he started his visit at our Museum. “I wanted to be in Radom, in the places which are connected with the fight for freedom but also in such places in which this hard-won Polish freedom is used well, wisely and effectively” – the Polish Press Agency quoted the President.

“I have always valued Gombrowicz for his lesson of modern patriotism which is made up not only of blood and tears, but first of all of an honest reflection upon Poland and Polish identity, free of complexes and stereotypes, sometimes critical and even painful.” These words were written by the President in our Visitor’s Book. But relationships between Bronisław Komorowski, the Witold Gombrowicz Museum and the Gombrowicz family are also more prosaic. Jerzy Gombrowicz often visited Mr President’s aunt who used to live in Radom and was an important person in Bronisław Komorowski’s biography.  The President of Poland, while still in the position of the Marshal of the Seym, supported efforts of the Witold Gombrowicz Museum initiators to keep the Wsola mansion a public property. Now he had a chance to check how his efforts were used and to meet the people who he encouraged during his stays in the city following the June 1976 protests and later on.