NewsThe final of the Non-Academic School of Creative Writing 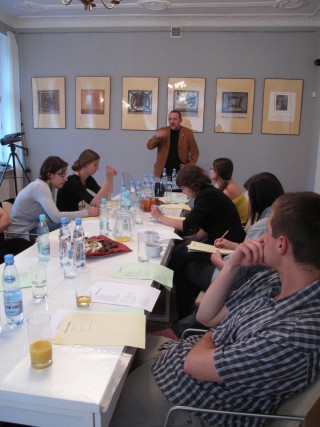 2011-05-27
The Non-Academic School of Creative Writing Project was carried out by the Witold Gombrowicz Museum and Razem dla Radomki/Together for Radomka Association in two stages: the first one aimed at appointing a group of local leaders of culture coming from the area of the commune of Jedlińsk who were later involved in the organisation of the School. The second stage aimed at finding literary talents as well as inspiring young people to write and create through participation in the national literary competition.

In the Project’s final literary workshops were conducted in Wsola and Warsaw by: Andrzej Franaszek, Andrzej Sosnowski, Włodzimierz Kowalewski and Jarosław Lipszyc. Ten laureates of the national prose competition A Diary of Adolescence took part in the workshops. The project was financed by the Orange Foundation within the framework of  the Orange Academy.